NSA: It's TRUE, we grab 200 MILLION of your text messages A DAY globally

NSA: It's TRUE, we grab 200 MILLION of your text messages A DAY globally Small fraction of global traffic stored in spies' servers

Documents leaked by whistleblower Edward Snowden have detailed the operation of an NSA system called Dishfire that collects, stores and analyzes 200 million text messages a day from around the world. 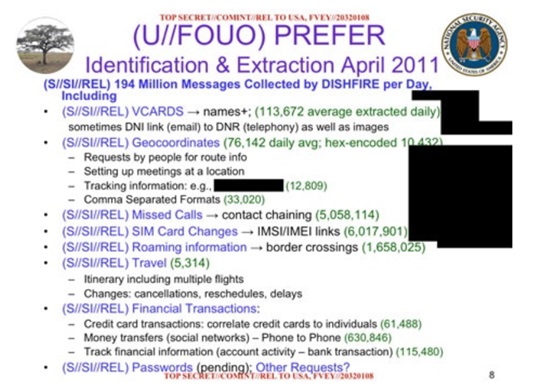 According to two slides published by The Guardian, text messages have been slurped by Uncle Sam since at least 2008 – and in April 2011, the operation intercepted 194 million SMSes a day. This sounds a lot, but bear in mind US mobile users alone send an estimated six billion texts a day.

The leaked 2011 presentation, subtitled "SMS Text Messages: A Goldmine to Exploit", details the type of information garnered in a 24-hour period globally. For example, Dishfire collected 1,658,025 notifications when people roamed from one network to another; more than 800,000 nuggets of financial data, such as money transfers; and the coordinates of more than 76,000 messages.

Documents from Britain's snoops at GCHQ say that the Dishfire tool isn't as targeted as their SMS slurping systems, which are tied to specific phone numbers, and that the NSA collects lots of untargeted text messages.

This makes it very useful to the intelligence services since they can search through the Dishfire archive to see what someone was texting before they became an official target, leaked GCHQ notes state.

The NSA tool is further appreciated by the Brits, because it collects lots of information on UK citizens that GCHQ can view without filing out the tedious paperwork needed to make a formal request under the Regulation of Investigatory Powers Act. SMS messages from US citizens are usually deleted, according to the documents.

'Specifically deployed against – and only against – valid foreign intelligence targets'

"It is a longstanding policy that we do not comment on intelligence matters," a GCHQ spokesman told The Guardian. "All of GCHQ's work is carried out in accordance with a strict legal and policy framework which ensures that our activities are authorised, necessary and proportionate, and that there is rigorous oversight, including from the Secretary of State, the Interception and Intelligence Services Commissioners and the Parliamentary Intelligence and Security Committee."

The amount of untargeted SMS messages collected by Dishfire is apparently so large that the NSA has had to develop an automated tool for scanning it, dubbed Prefer, the documents state. Prefer mines "content derived metadata", and states "such gems are not in current metadata stores and would enhance current analytics."

"The implication that NSA's collection is arbitrary and unconstrained is false. NSA's activities are focused and specifically deployed against – and only against – valid foreign intelligence targets in response to intelligence requirements," said an NSA spokeswoman.

"Dishfire is a system that processes and stores lawfully collected SMS data. Because some SMS data of US persons may at times be incidentally collected in NSA's lawful foreign intelligence mission, privacy protections for US persons exist across the entire process concerning the use, handling, retention, and dissemination of SMS data in Dishfire. In addition, NSA actively works to remove extraneous data, to include that of innocent foreign citizens, as early as possible in the process."

Running the numbers, 200 million text messages in terms of global traffic is nothing, which indicates a high level of targeting. On the other hand it's unlikely that the number of suspicious people on any target list would produce that many text messages (unless the list itself is massive) so there are presumably extraneous text messages being collected.

"You should assume every government in the world is spying on SMS messages that pass through their borders," Jon Callas, CTO of secure messaging biz Silent Circle told The Register. "I consider text messages to be the least secure thing you can do on a mobile. SMS is a hack – it was never designed to be secure and was thrown together for convenience."